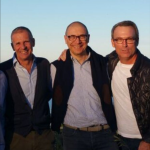 Antonio is a highly distinguished and accomplished professional who has over 30 years of experience working in business development, international business and trade. Antonio began his academic career with plans on becoming a diplomat upon graduation, and during his time at university completed a master’s degree in Political Science. After graduating and working in the business corporate world for several years he decided that being an entrepreneur would allow him the freedom to live the life of his dreams and build businesses that provided value.

In 1997 Antonio began his first business, entitled Agap International Sarl, a seafood company focusing on the international trading of frozen fish. Throughout the years, Antonio has continuously grown his business and steadily increased their share of the market. In 2017, Agap International Sarl received the Mediterranean Enterprise Award for Best Seafood Company.

Antonio is the owner of six successful businesses, spanning from real estate to construction. He looks to continue growing as an entrepreneur, creating new successful companies and expanding the reach of the ones he currently has. As for his first business, Agap International Sarl, he is looking forward to continuing to increase his sales in the Chinese and Far East industries.

Antonio has remained very active within his industry attending several trade shows and has affiliations with ESAP China. When not working, Antonio enjoys traveling and staying active with sports such as biking, tennis, swimming and traveling around the world.

Bristol Who’s Who Member, Antonio Bertelli, can be found on the Association Directory, where he is looking forward to networking with you.