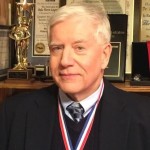 “Imagine the consequences of an autonomous system that could, by itself, target and attack human beings. I call upon States to ban these weapons, which are politically unacceptable and morally repugnant”

–Antonio Guterres, the Secretary General of the United Nations

The Honorable Dr. Dale P. Layman, AS, BS, MS, EdS, PhD#1, PhD#2, Grand PhD in Medicine, MOIF, FABI, DG, DDG, LPIBA, IOM, AdVMed, AGE, is a voice for humanity against the Machine. His human rights efforts center on telling the public the truth about what is really happening in the rapidly accelerating field of artificial intelligence (AI) and robotics. As founder of Robowatch, LLC, his watchdog media subsidiary, The Robo-Reporter, ran a recent piece profiling the arms race between the United States and Russia for the “Unrestricted Use of KILLER ROBOTS.”

Dr. Layman is joined in his plea to stem the tide of Killer Robots, by the United Nations. In November of 2018, the U.N. called forth a Paris Peace Forum, in honor of the WWI Armistice Centennial.  During this Centennial, a cry was made to ban and recognize the danger of “fully autonomous weapons systems.”

An earlier article, this month, on The Robo-Reporter, also recognized the global advent of robot priests. The BlessU-2, a more recent pastoral robot development, can offer words of blessing, has a touchscreen, can raise its arms, flash lights in the palms of its hands, and recite verses from the Bible in five different languages. Layman highlights these robots’ controversial place with regard to the sanctity of religion.

Truly, Dr. Layman and those who stand with him at the fore of the AI fight, are acting as canaries in the tunnel of “Technological Blindness.”  This “Blindness” makes many people unable to comprehend the threats inherent in technological utopianism and autonomous weaponry.

To learn more about the ticking down of the Robot Death Clock and find out what you can do to stop it, visit robowatch.info, today.  As the Honorable Dr. Layman states, “It’s not too late to avoid the AI Cross-Over year of 2030, and the impending Death Year of 2045!”

For 32 years, he was a long-term Professor of Human Anatomy & Physiology courses and Medical Terminology courses at Joliet Junior College (JJC), located in Joliet, Illinois.  It is important to realize that Joliet Junior College is the first and the oldest, public two-year college in the entire United States, having been founded in 1901.  Thus, Dr. Layman was very incensed by the fact that he was still NOT allowed to even call himself a Professor, after he earned his first PhD degree (in 1986) from the University of Illinois!  JJC was still one of the minority of “Instructor-only” two-year schools stubbornly remaining in the State of Illinois.

The ULTIMATE INSULT occurred in 1994, when Dr. Layman became angered at the college’s refusal to allow him to even use the title of Professor in news releases to the press!  Dr. Layman received initial encouragement from Len Hodgman, a former college trustee and retired faculty member who was not allowed to call himself “professor” while employed.  He began a movement to have the status of all instructor-only schools in the Illinois Community College system, improved so that they could become legitimately comparable to the faculty-ranked schools in the system.  His reason for doing this was that it put the faculty members of these colleges, that were qualified to be professors but could not use the title, at a disadvantage when competing for grant money and in getting professional articles published.  He was successful in getting this changed at the State Level, in the latter part of 1994.  In the year 2000, Joliet Junior College finally adopted a formal ranking system for its faculty, as well.

Bristol Who’s Who VIP Member, the Honorable Dr. Dale Layman, AS, BS, MS, EdS, PhD#1, PhD#2, Grand PhD, MOIF, FABI, DG, DDG, LPIBA, IOM, AdVMed, AGE, can be found on the Who’s Who Directory, where he is looking forward to networking with you.