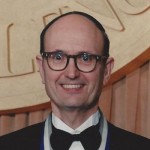 In 1963, Dr. Halladay received his M.S.E.E. Within four years, Dr. Halladay graduated with his Ph.D. in Electrical Engineering from the University of Minnesota and in 1967, he moved his family to Washington State where he began work at the Boeing Company. His initial work with Boeing involved research of microwave integrated circuits for phased array applications.

Dr. Halladay spent 40 years with Boeing, where his career involved aircraft components and subsystems, satellite components and subsystems, communication systems, electromagnetic compatibility issues, and computer simulations of circuits, subsystems and systems. He was selected as a Boeing Associate Technical Fellow in 1991, Technical Fellow in 1995 and Senior Technical Fellow in 1999. In addition to hardware design, implementation and delivery, he has been involved with computer systems, software and networking. He is experienced in computer languages including FORTRAN, C, Visual Basic, IEEE 488 instrumentation control and Ethernet protocols for instrumentation command and control. To date, Dr. Halladay has been instrumental in the development of a Boeing state-of-the-art Signal Analysis Laboratory for component, subsystem and system analysis, verification and validation.  Dr. Halladay has also published papers in IEEE Proceedings, IEEE Transactions on Electron Devices and IET Electronic Letters and hold 4 US patents in geolocation algorithms and hardware implementations.

Dr. Halladay is a registered Professional Engineer in Washington, and is a member of the National Society of Professional Engineers and Washington Society of Professional Engineers. He is a member of Tau Beta PI, Eta Kappa Nu and Order of the Engineer honor societies and the Psi Upsilon fraternity. In addition, he is a Life Member of the Institute of Electrical and Electronic Engineers and was elected in 2013 for the position of Senior Member. As a current retiree, he enjoys gardening, his pets from the Humane Society, computer applications involving video surveillance, programmable home lighting, and remote security applications for cell phones, 3D printing and learning via the internet.

Who’s Who Member Dr. Henry E. Halladay, P.E. can be found on the Who’s Who Directory where he is looking forward to networking with you.